The Kaufhaus des Westens (KaDeWe) [Department Store of the West] is the best-known department store in Germany and, with a sales area of 60,000 m², one of the largest in Europe. Since the end of the 1920s, the delicatessen department on the sixth floor has been one of the most important attractions of the Berlin luxury department store. After renovation work in 1978, the KaDeWe now has the second largest food department of any department store in the world. In 2018, the owner, the Thai Central Group, decided to carry out a large-scale renovation of the "Food hall", as the gourmet restaurant is officially and internationally called, which is laid out on 7,500 m² of floor space. As per the planning of the Berlin design studio Karhard, Lasa Marmo supplied a solid counter made of LASA BIANCO NUVOLATO®™ for the redesign of the champagne bar in the same year. The product line LASA !NDIVIDUAL®™ was delivered for use with the newly designed cheese department counter’s shopping bag shelves.

Since its foundation in 1907, KaDeWe has been a superlative department store. As one of the largest department stores in the world, the Berlin department store reinvents itself again and again and allows tradition and modernity to merge. The shop windows and interior design of the KaDeWe are a reflection of current trends. The entire sixth floor is dedicated to delicacies and food culture and, with numerous specialty restaurants and delicatessen departments, has always been a magnet for inquisitive and demanding connoisseurs.

The architects Thomas Karsten and Alexandra Erhard from the Berlin design studio Karhard present the food offered for sale in the newly designed departments of the "Food hall" via the chosen form of interior design. Conceptually, the materials used, in combination with light and a haptic style that is oriented towards the senses, are based on the products on display. In the champagne bar, the French sparkling wine from the Champagne region is of course the focal point. The interior designers created a light champagne ambience with Lasa marble from the LASA BIANCO NUVOLATO®™ product line, refined in delicate white and grey tones, polished gold surfaces and a cream-coloured terrazzo floor. Even the spherical lamps are reminiscent of the sparkling champagne bubbles. The material of the shopping bags storage space of the sales counter in the KaDeWe's spacious cheese department, which offers over 1,300 types of cheese from all over the world, is just as stylish. Here, Lasa marble of the Lasa Marmo product line LASA !NDIVIDUAL®™, is reminiscent of the natural colouring of many a tasty cheese speciality. 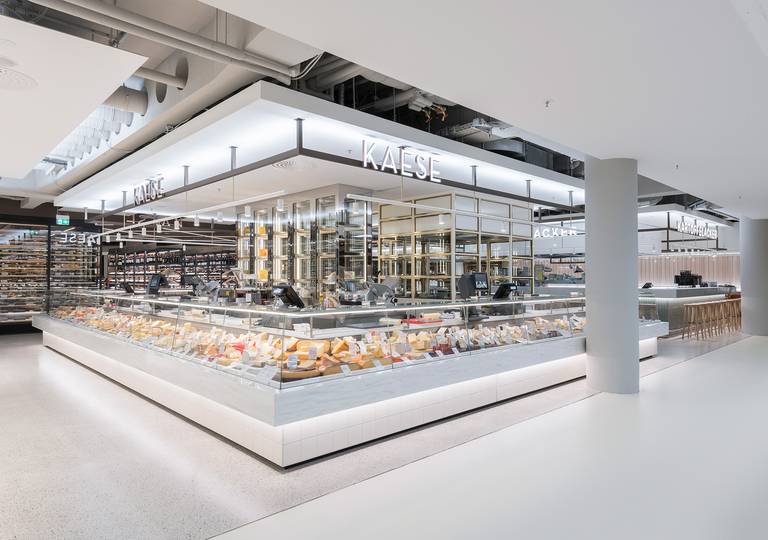 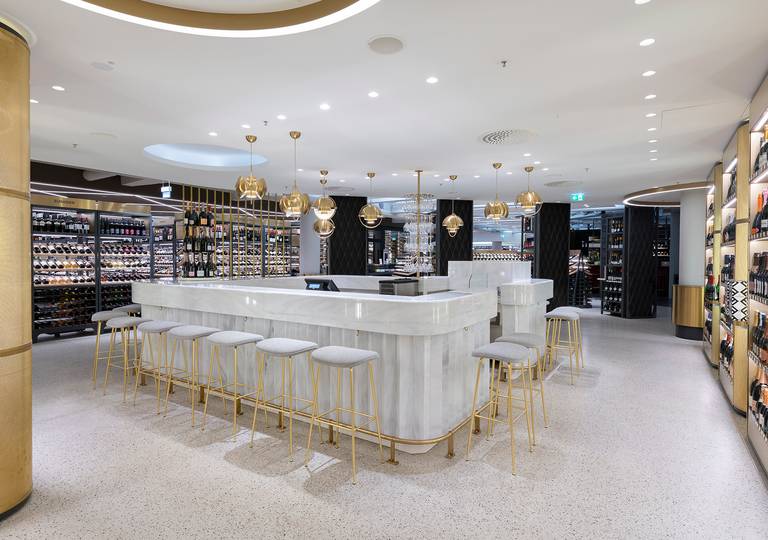 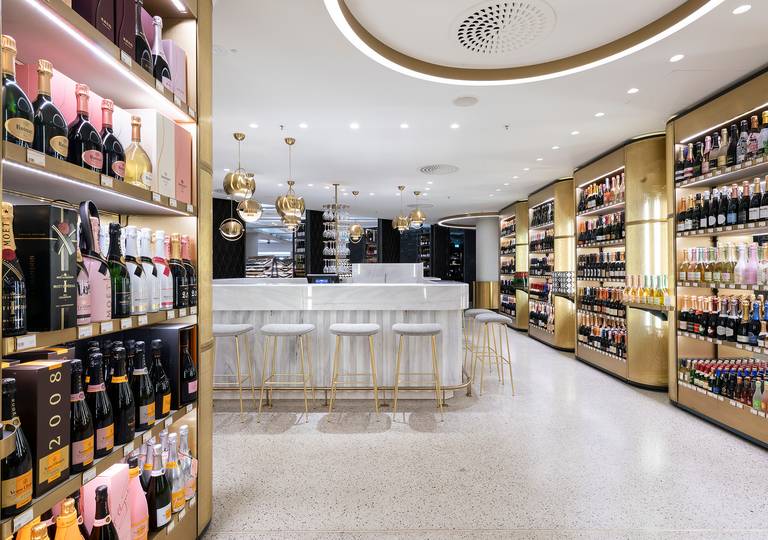 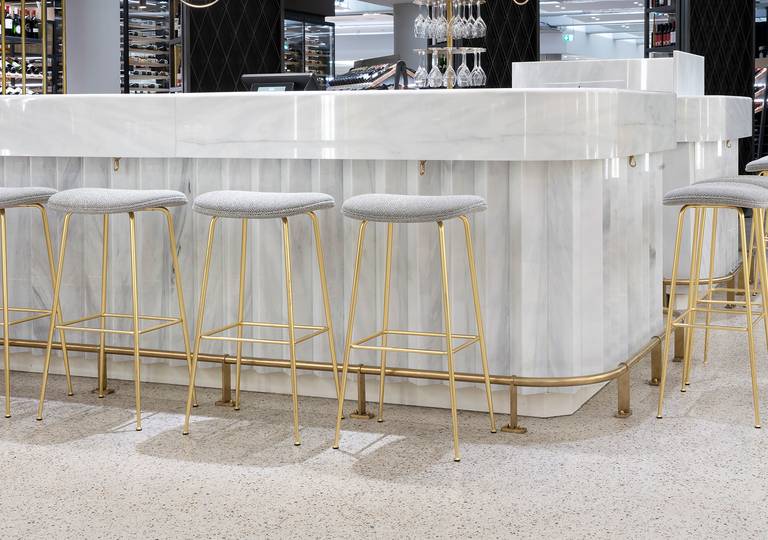 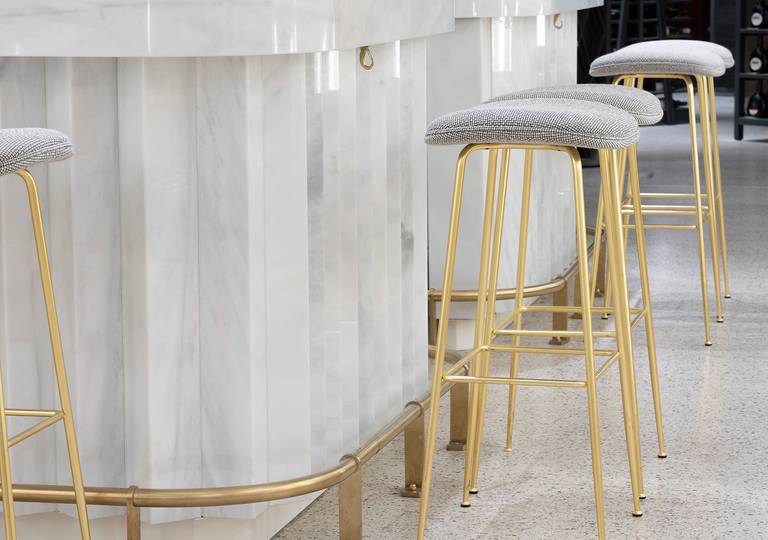 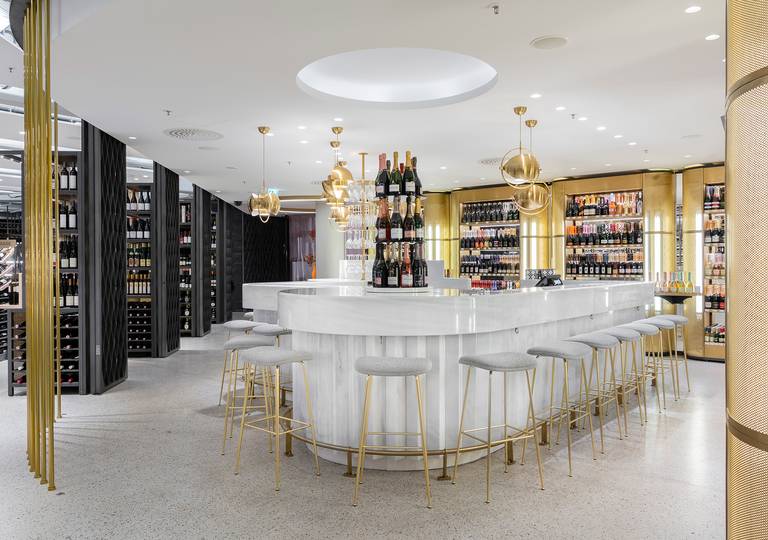