In 2011, a modern residential building was erected in Berlin's Linienstraße. Its façade was clad with 650 m² of LASA BIANCO ORTLES®™ ground Lasa marble. The building was constructed on one of the last large vacant plots in the suburb of Spandau. The new building offers space for 26 exclusive condominiums and was realised as a five-storey building with a glazed penthouse offering a magnificent view over central Berlin (Berlin-Mitte).

The architects of Gewers Pudewill Berlin succeeded in combining partially rounded glass surfaces with the radiant white façade cladding of Lasa marble in a special way. Large-format windows offset by each storey create a lively, differentiated surface into which the large loggias in the adjacent Rückerstraße (Rücker Street) blend seamlessly. The façade comes alive through the precision and finesse of the joint pattern and its imaginative detailed solutions. This differentiation in the façade design arose in close coordination with the Berlin Office for the Protection of Historical Monuments. Window elements protruding by 20 centimetres from the marble façade and vertical perforated façade swords, which, depending on the position of the sun shining on the 3-centimetre-thick façade panels made of Lasa marble, not only provide a lively play of shadows but also give the modern building a lively appearance. In addition, the entire structure appears to be smaller in parts and is thus harmoniously integrated into the urban structure of the suburb of Spandau (Spandauer Vorstadt).

For the Berlin team of architects Gewers Pudewill, it was important to use the chosen formal language of contemporary architecture to process the history of the surroundings conceptually and to regard it as a "mirror of their time". Accordingly, architecture should enable flexible ways of life and be able to react to the most diverse currents and at the same time make a valuable contribution to urban development through its design. There is no doubt, that the chosen natural stone façade in LASA BIANCO ORTLES®™ doesn’t only convey the feeling of being able to live in a very special house to the people who inhabit the building. 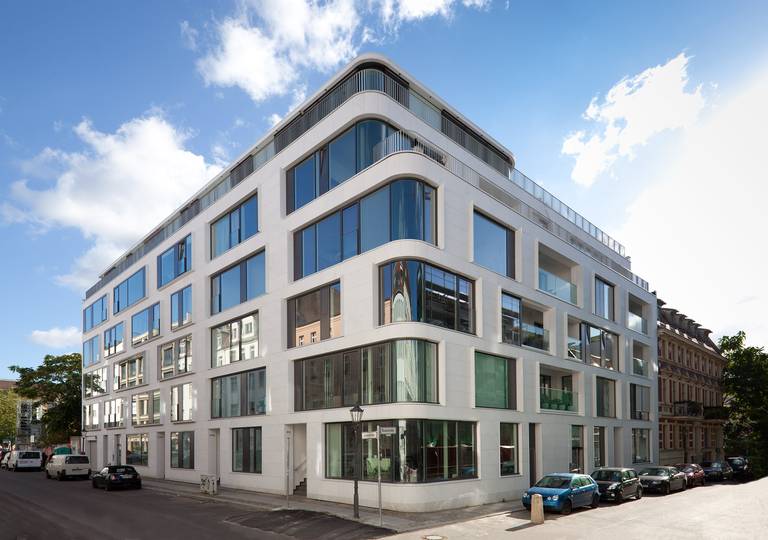