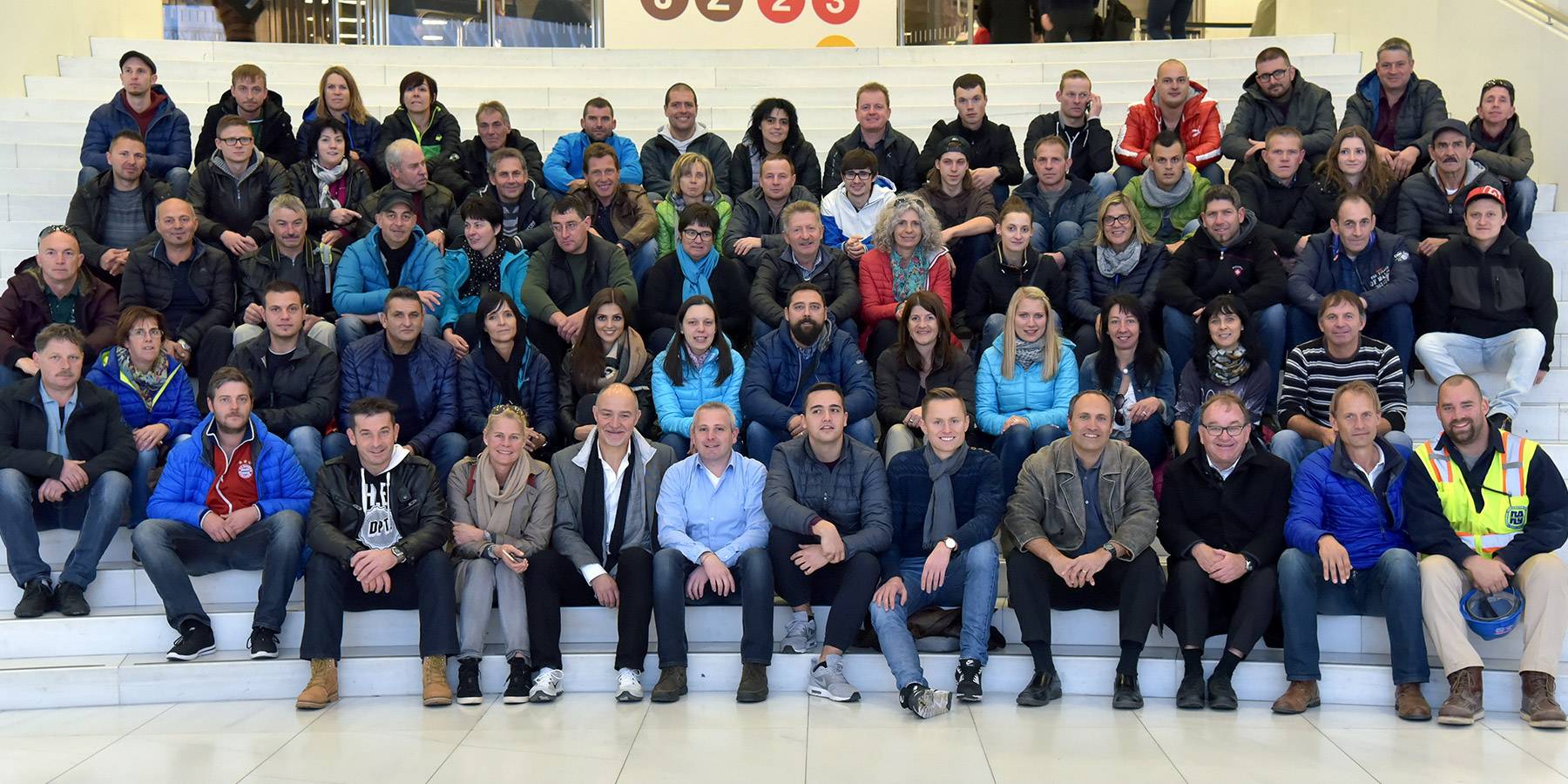 A Vision in White

As already announced, a good portion of the employees of Lasa Marmo Ltd., including production director Erich Tscholl, set out for New York in the end of October, so to admire the Lasa Marble at the World Trade Center underground station on the spot. "It is important for me that our employees can see what they have achieved." said Tscholl.

After one had escaped from the stringent controls at the airport and had given their fingerprints and a facial scan, the group took a bus to go from the district Queens over the Manhattan Bridge to Downtown, the southernmost part of Manhattan.

Already on the next day, the actual reason for the journey was on the program: the visit to the WTC Transportation HUB under the informed guidance of CEO Dr. Paul Graf from Switzerland and the responsible engineer of the WTC project at Lasa, Jan Peter Keller from Germany. Paul Graf thanked all employees who had together implemented the WTC project in a short but emotional speech. He emphasized how capably the team had worked together during these four years but also with which difficulties it had to be dealt with time and again. The production of many complex parts, in total more than 70.000 pieces, which mainly arose from the arms of CNC molding cutters, is so far the largest order in the history of Lasa Marmo. The project handling demanded a great deal of all involved persons, sometimes pushing it to the limits, while at the same time never losing sight of the client – here the New York harbor authority – and his wishes. Every single marble part of the type Lasa Bianco Nuvolato was laid out like it should later be tiled at the Oculus, in the connecting passageways, at the underground platforms. In this, it is indispensable to have an eye for harmony. And inspectors were strict judges during the so-called inspections – not the tiniest disharmony escaped their eyes. Also, the logistic challenge, from ordering the containers to their loading on-site was not an easy undertaking. Finally, not less than 176 container units with cataloged white Lasa marble were brought to Genoa and from there shipped to New York.

The amazement was enormous. At the Oculus, which is the name of the main hall in the underground station, the visitor is received by a colossal surface of floor panels, at grade and upstairs where one can stroll along small stores. Some are not yet opened; but colored panels adumbrate that a lot is still happening behind it. Further, via escalators or stairs made of Lasa Marble, one arrives at viewing platforms, so-called balconies, from which one has an overview on the entire interior of the oval construction. One can hardly get enough of this view of the bright and friendly interior and the never-ending mass of people. Inevitably, the eyes wander upwards across the narrow gaps between windows through with daylight dances on the snow-white marble. In the connecting passageway East West Connector one finds a huge surface of wall tiles on which meanwhile illuminated advertising of respectable size has been mounted, showing a constantly changing play of colors. Advertisement brings the money. From there, in case one does not have a metro ticket, one can look down on further stairs of Lasa Marble, which are leading to underground station platforms of the New York underground.

From the outside, the Oculus has the shape of a peace dove with 110 white steel ribs, each of it weighing 56 tons. Behind a terrain locked with plastic tape, there are wooden pallets with Lasa Marble, packed in transparent plastic and a red label saying "Lasa Marmo – FRAGILE". Workers with orange and lime green reflective vests and protective helmets of various colors are kneeing on the floor, installing benches of Lasa Marble around the Oculus. It will still take some time until the New York people and visitors to New York can repose on this natural stone, which comes from the small village in Venosta Valley (Vinschgau), and take a rest from the fast life in Big Apple – how New York City is called affectionately.

For sure, one has also devoted oneself to other sights in New York. May it be the shopping tour at Macy’s, the world’s largest shopping mall; may it be to go ice-skating at the Rockefeller Center, having a coffee at the Trump Tower, where rose marble can be found, the flickering screens of illuminated advertising at the Times Square, a walk through Central Park, the pulsating life at the Grand Central Terminal, this nostalgic, enviable train station with its adorable flair, the "must-have-photo" with the bronze-colored bull in Wall Street, the walk through China Town and Little Italy or across Brooklyn Bridge and again shopping at Columbus Circle or in 5th Avenue, the world’s most expensive strip mall. Or dinner on the Spirit of New Jersey, an excursion boat drifting by in front of the Manhattan skyline in the evening hours until Lady Liberty.

Impressive also is the One WTC Observatory with its observation deck from which one can enjoy a bird’s eye view of New York. A place of mourning the 9/11 memorial where not only memories of September 11 awaken but also where images, words and what is remaining of the Twin Towers has found a home.

5 days that end all too soon and the group is already heading back to JFK airport. The flight time is reduced by one hour to 8 hours. Milano welcomes everyone with sunshine and the bus to Lasa (Laas) is already waiting. Everybody is tired but also awaiting to come home to the calm, green and with its high mountains ever so beautiful Venosta Valley (Vinschgau). Besides numerous pictures, shopping stuff and souvenirs, everyone has above all taken home memories of a pulsating city but also the calming influence right in the center of it, where one can walk across white Lasa Marble – being by the feeling of being home.

I would like to end these lines with a thank you to all those people who made it possible for us to travel to New York – it will forever be unforgettable for all of us and will become part of the history of Lasa Marmo and maybe one even keeps telling about it in a hundred years. Well, when Lasa goes on a trip … there is always some story to tell. Having said this, do not hesitate to ask us, we enjoy telling about it.
Sigrid Zagler 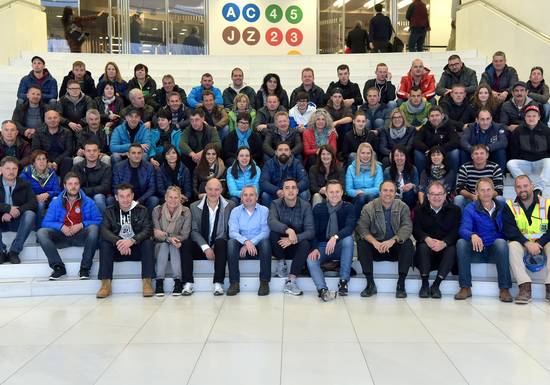 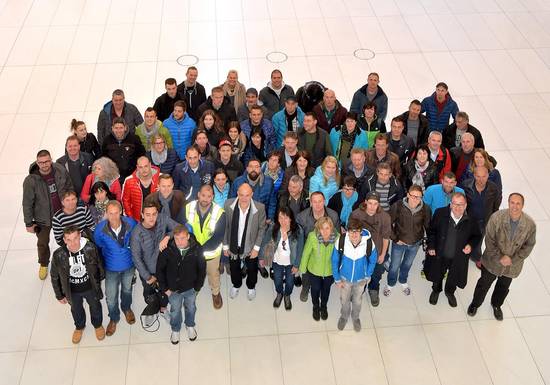