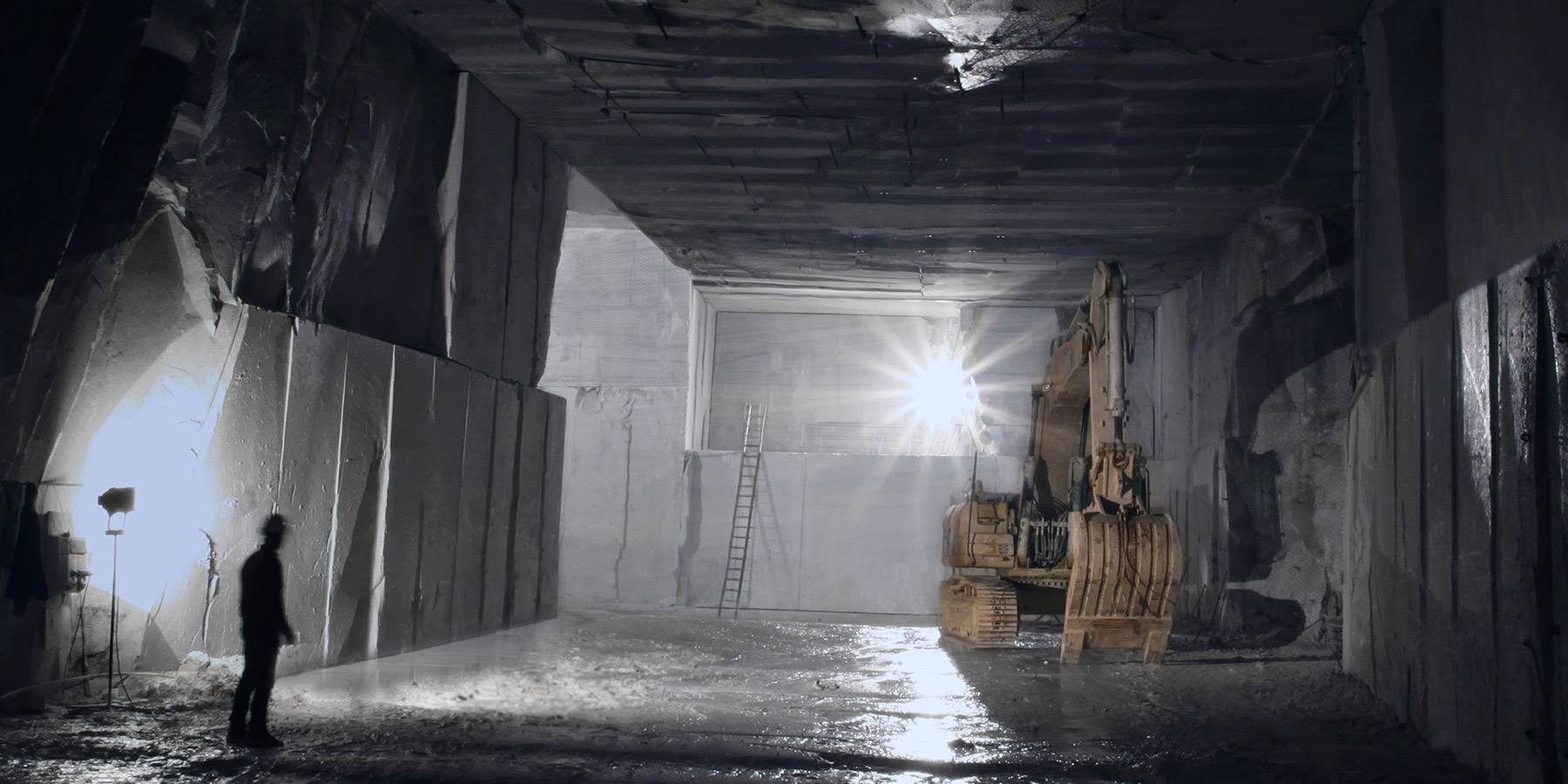 Place of origin of all LASA® varieties for over 90 years

It is South Tyrol's most colossal marble quarry and one of the world's largest deposits of white marble in a mountain massif: The White Water Quarry (Weißwasserbruch). Located at 1,526 m above sea level at the orographic right entrance of the Lasa Valley (Laaser Tal), the quarry leads several kilometres deep into the interior of the Lasa (Laas) marble mountain via an extensive network of labyrinthine corridors and mining halls. With lengths of 100 metres, a width of 20 metres and a height of 30 to 40 metres, the tunnels are as large as cathedrals. The marble quarry takes its name from the small waterfall called "Weißwasser", whose water is enriched by the minerals and substances contained in the marble.

The year was 1883, when the quarry was first leased and managed by the Laas (Lasa) stonemason and marble pioneer, Josef Lechner, from the municipality of Laas (Lasa). Lasa marble was first extracted by open-cast mining. From 1896 Lechner drove a tunnel into the mountain and from then on operated the quarry in an underground mining format. At the turn of the 20th century, the "Marmor-Lechner", as the marble entrepreneur was generally known, employed up to 100 men in the White Water Quarry. From 1921 the Munich sculptor and "Lasa Marmo" founder Mathias Gasteiger took over the quarry as a lease. Lasa Marmo has used the White Water Quarry since the company was founded, which was in 1925 as a limited liability company and then in 1928 with increased capital as a public limited company (Società Anonima). To this day it is the most important marble quarry for the Lasa marble industry. The "Laaser Marmorbahn" (Lasa Marble Railway), which was put into operation in 1930, enables sustainable transport of the marble blocks from the quarry to the modern processing plant in the valley all year round.

In the White Water Quarry, Lasa Marmo extracts marble of the highest quality. The marble is highly crystalline, white and of high quality. A White Water Quarry sample with a value of 97.04 percent, boasts the highest white-metric characteristic value¹ of all marble quarries in the region. Depending on quality and especially colour, the marble extracted in the white water quarry is processed at the "Lasa Marmo" plant into varieties of the higher classifications LASA BIANCO®, LASA VENATO® and LASA !ndividual®. While still in Lechner’s times the white statuary-marble taken from the White Water Quarry was used by numerous well-known sculptors for statues and monuments all over the world - such as the Victoria Memorial in London - white water marble is used today mainly for wall coverings, floor slabs, tiles, floors, stairs, window sills and skirting boards. For example, all wall and floor coverings of the new New York transfer station, the WTC Transportation Hub, are made of marble, which originated in the Lasa (Laas) White Water Quarry.

The quarries in the Lasa Valley (Laaser Tal)

All of the Lasa (Laas) quarries belong to the Jenn Cliff Massif, precisely that mountain ridge with the largest natural bed of marble. The marble deposits in the Jenn Cliff Massif are estimated at approximately 30 million cubic meters. It is therefore among the largest white marble deposits worldwide. The White Water Quarry at an altitude of 1567 meters above sea level, which is today managed by Lasa Marmo, is the most operated marble quarry in the Venosta Valley (Laaser Tal).
In addition, there are the Lechner Quarries, comprising the Jenn Cliff Quarry, Zirm Cliff Quarry, and the Mahd Cliff Quarry. Historic discoveries and quarries: Located on a level with the White Water Quarry is the Quarry Tarnell. The Mahd Cliff discovery is however located behind the Jenn Rift at 1780 m, and a bit further into the Lasa Valley (Laaser Tal), the Valtin Ground discovery is located at 1914 m. The discovery place in the Lasa Valley (Laaser Tal), where marble was first exploited was the 'Jenn Cliff Ries'. Between 2150 m and 2200 m behind and above the Zirmkopf the historic Jenn Cliff Quarries can be found: New Quarry, Middle Quarry and Back Quarry. At the Zirmkopf (1914 m) the Zirm Cliff Quarry was formerly exploited, as well as the Upper Nessel Cliff (1635 m) and Lower Nessel Cliff (1610 m) in the Jenn Rift.

Like all other quarries, the White Water Quarry lies in the Stelvio (Stilfser Joch) National Park and therefore cannot be reached by public roads. Due to the mining activity, the White Water Quarry is not accessible to visitors. However, in order to convey the special fascination of an underground visit to the Lasa (Laas) marble quarries, we offer you a virtual visit to the quarry.

Thanks to modern 360° film technology and drone flight, you can get an impression in Virtual Reality 3D of the place of origin of the Lasa marble - equipped with commercially available VR glasses or VR glasses suitable for smartphones - and, among other things, be there when a 30-tonne block is broken from the marble warehouse and is removed ready for transport to the plant. The 360° view without VR effect also works on mobile phones and desktops. 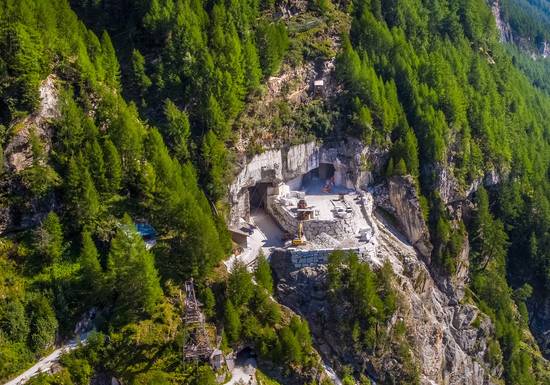 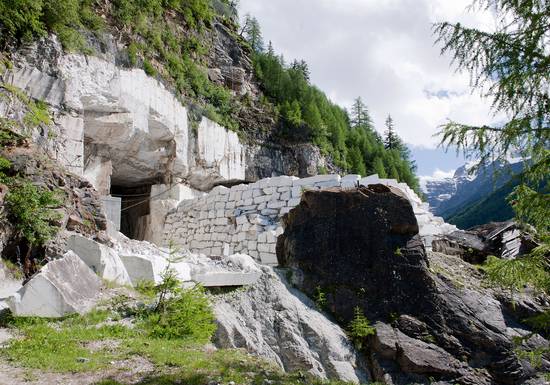 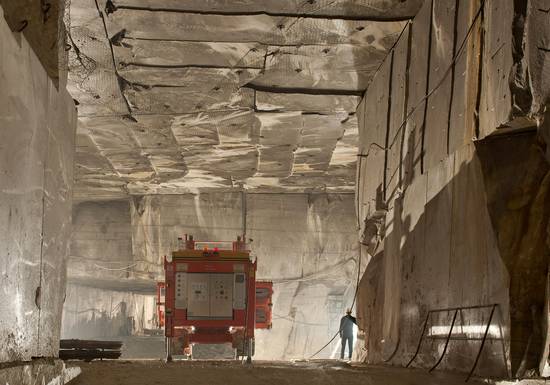 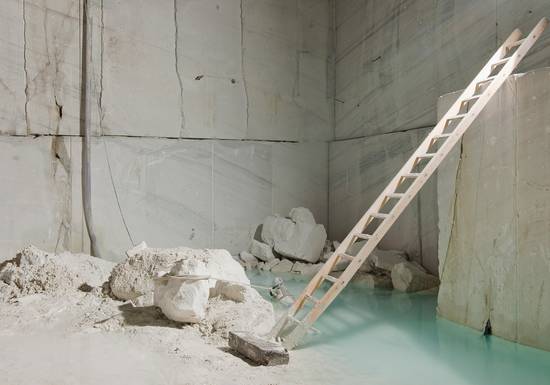 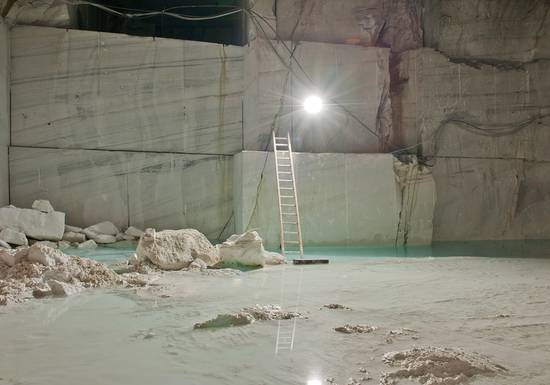 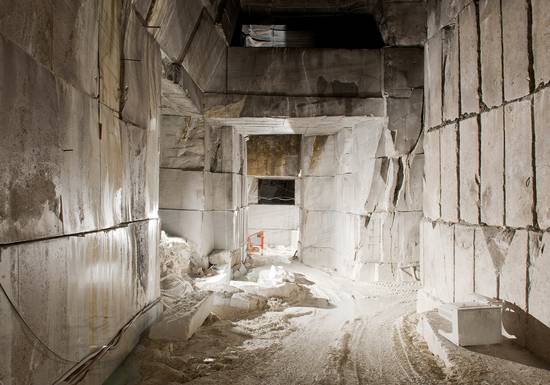 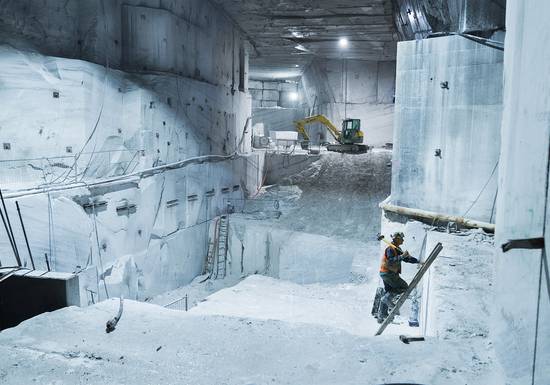 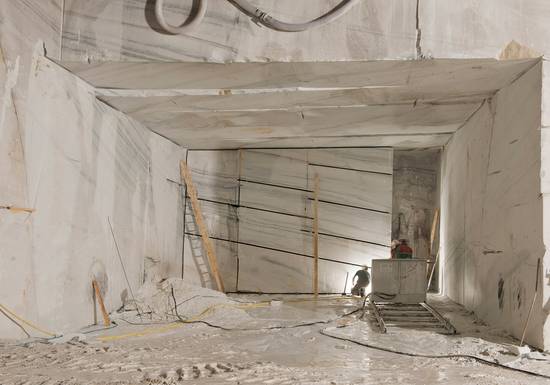 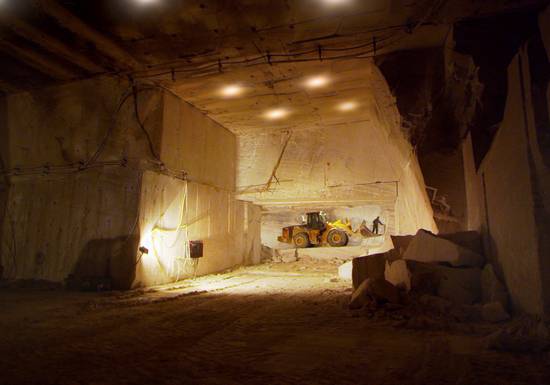 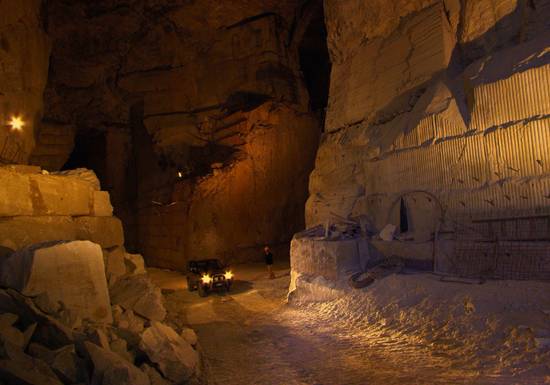 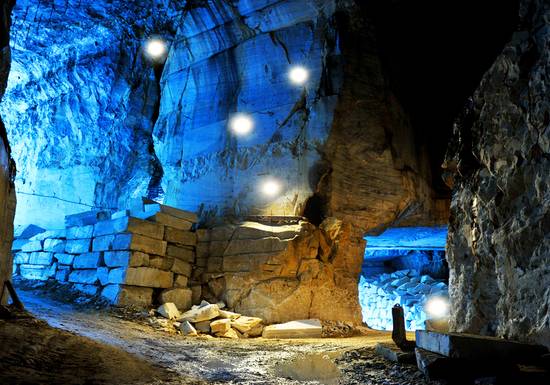 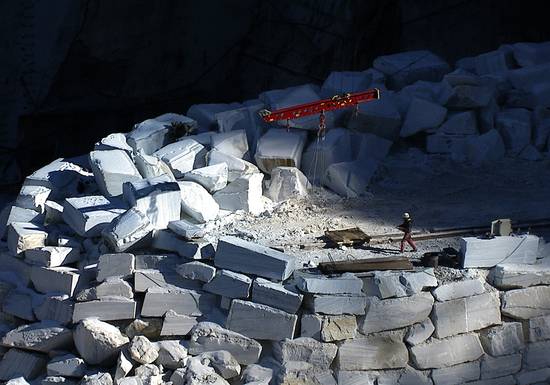